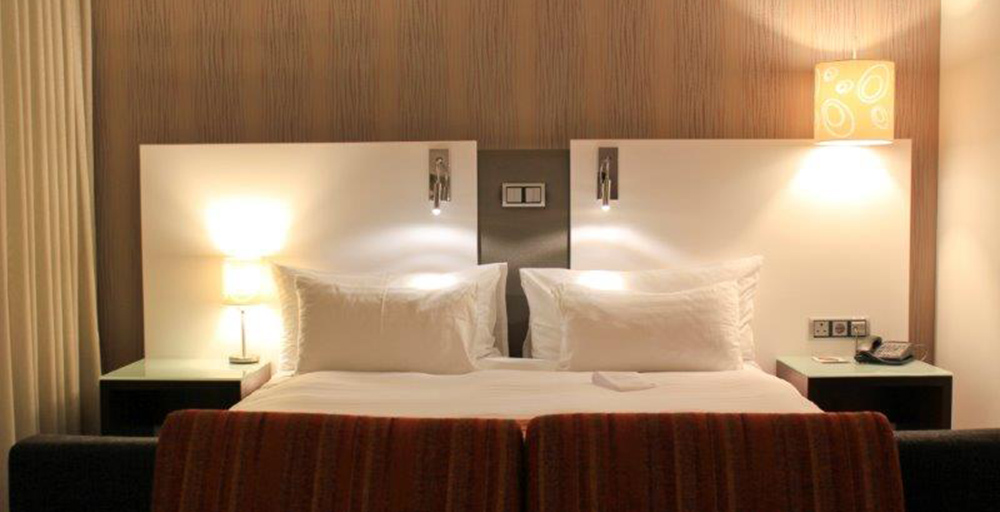 Posted at 15:20h in Uncategorised by Sherpa Brand & Design

Hotel Verde, part of the BON Hotel Group, and owned by Mario and Annemarie Delicio has been dubbed ‘Africa’s greenest hotel’ and with prestigious awards such as the Enviropaedia Ecologic Award for water conservation, Eskom Energy Efficient Forum Award for Commercial Buildings and the Internorga Company Trendsetter Award it is obvious why. Every aspect of the hotel is designed to be as sustainable as possible, employing systems that are efficient at saving water and electricity, while reducing waste. The building features green landscaping, a vegetated roof and an impressive three-3kW vertical axis wind turbines and a façade of photovoltaic panels contributing to on-site renewable generated, these are just a few examples of the technologies employed on site amongst many other energy saving initiatives. The Lighting infrastructure formed a central part of the energy savings envisioned by the Delicios and they wanted to ensure they invested in cutting edge, energy efficient lighting technologies right from the start whilst keeping with the aesthetics of the hotel, to achieve this they turned to local lighting experts Eurolux and Blair Hammond & Associates for help.

Eurolux, one of South Africa’s best known lighting brands, and Blair Hammond & Associates, Professional Lighting Practitioners and Consultants, were contracted to design and supply lighting solutions for Hotel Verde’s bedrooms, conference rooms, living wall, parking garage and exterior lighting, which included architectural, street and security lighting. The brief was to create an exceptional guest experience showcasing the beauty and functionality of energy efficient lighting, whilst adhering to the most advanced global sustainability standards and only being allowed to illuminate downwards because of aviation safety standards, this put the importance of luminaire selection right at the top of the list when it came to the exterior design as the hotel is a stone’s throw from the Cape Town International Airport.

In order to achieve all of the above, a full lighting design and specification was completed for each of the specific areas, taking into account luminaire specifications and lighting control systems. A detailed Basis of Design (BoD) document was also compiled to document all technical aspects of the concept design development, relevant codes, systems, equipment, parameters and measures implemented in order to achieve maximum LEED rating. 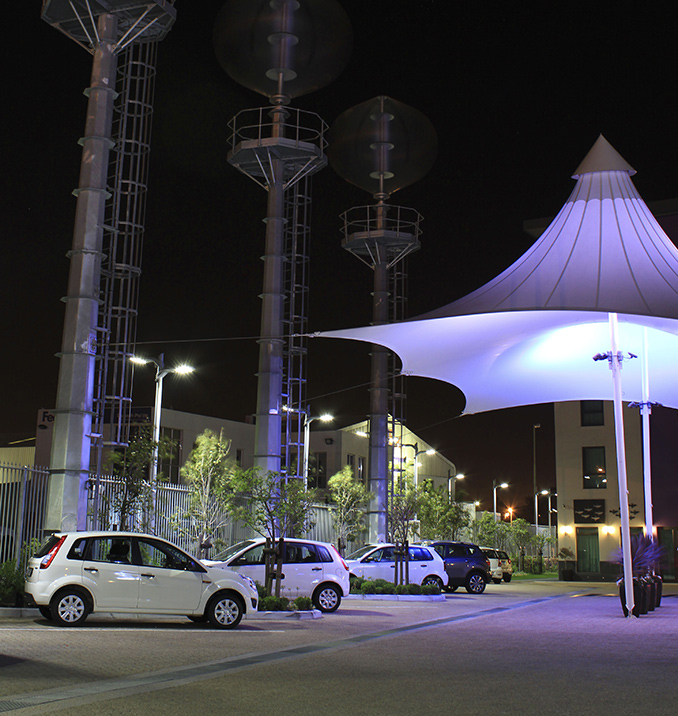 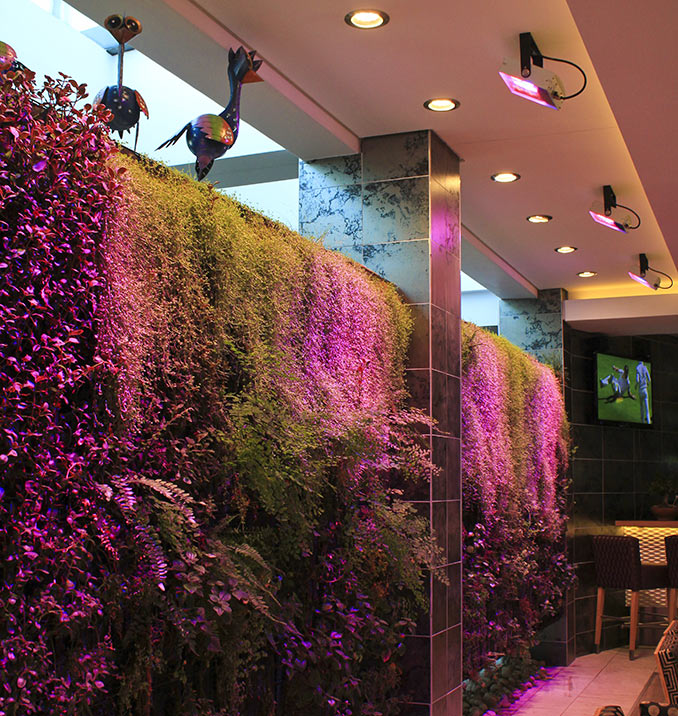 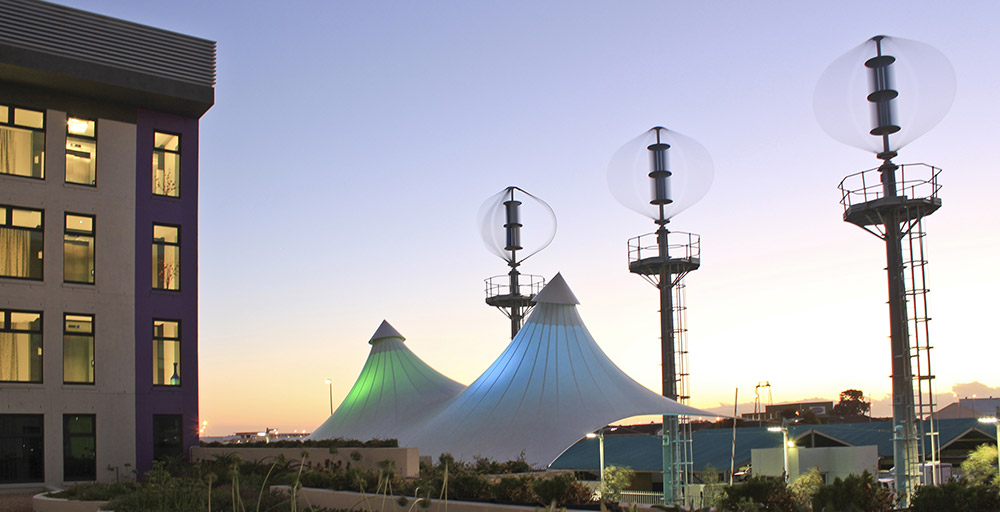 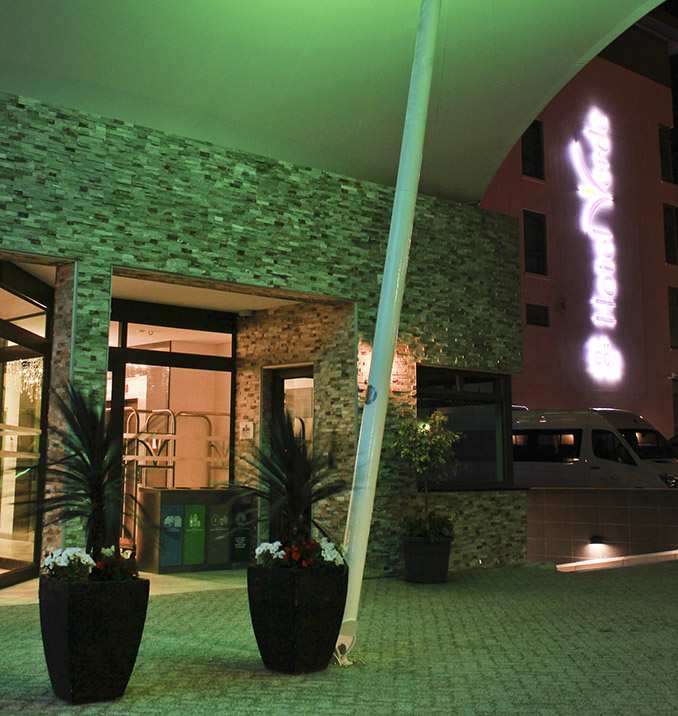 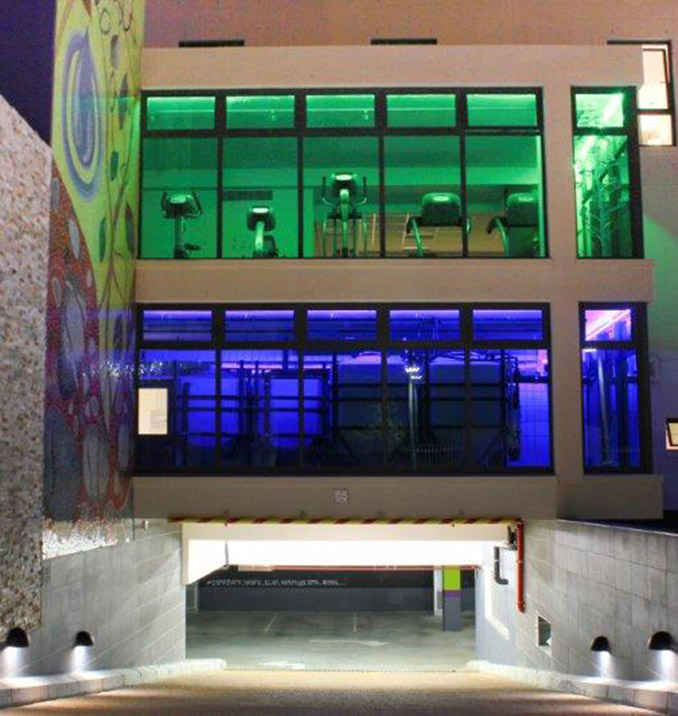 LED light sources were installed throughout the hotel, interior and exterior, with the exception of the conference rooms and task lighting for offices, where low brightness T5 fluorescent fittings were installed which illuminated the working plane with the main aim to prevent disability and discomfort glare for guests and employees alike. Eurolux also supplied all X Meters of LED strip lighting and drivers for the hotel. All fittings in the conference rooms, reception and restaurant are also controlled by the lighting control system, which was installed by a specialist company, so that energy efficiency can be taken to another level. In addition to this Eurolux assisted in further energy efficiency by supplying a range of sensors. The first being motion sensors. All public areas including the passages, boardrooms, underground parking areas and gym have motion-sensors that activate the lights once motion is detected. Upon no further motion, the lights will switch off after a timed period of about 15 minutes. The second activator is a light level sensor. This measures the amount of light received, such as natural light from entering through windows which dims or brightens the output of the lights to ensure that only the required amount of light is given out at any given point.

Eurolux supplied all the bedrooms in the hotel with 7W GU10, non-dimmable Aeon Lighting Technology (ALT) LEDs with a 60° beam angle, these lamps produce a warm white light like no other LED on the market and have a three year warranty, these lamps are also covered by a US $2 million product liability insurance from the manufacturer with the added R100 million product liability insurance covered by Eurolux. Seven down lights were fitted per room, as well as beautiful matching pendants and table lamps which were also fitted with LED lamps. Finally warm white 12V LED strip lights were concealed in the bulkheads and behind the TV units which illuminates the ceiling and walls with a beautiful wash which adds an extra sense of well-being and relaxation.

Hotel Verde’s rooms are access controlled and make use of a card system and no longer use keys. The guest simply inserts their card in the card key unit to unlock and open the door to their room, which as they enter the room only a guiding light illuminates the passage where the card slot is located, the guest then inserts their card into the slot which controls the power in the room. All lights and electrical equipment in the room is controlled this way with the exception of the plug sockets which enables the charging of devices whether occupied or not, on departure the power is deactivated to ensure maximum energy efficiency.

Another striking feature of the hotel is its beautiful living wall, adjacent to the reception lobby and restaurant. It receives natural sunlight on the one side via skylights and red and blue light from LED grow lamps on the other which stimulates plant growth. 35W LED grow lights manufactured by ALT were installed under the precise calculations and specification of Phil Hammond, Lighting Engineer and Director of Blair Hammond & Associates, which are now available from Eurolux. According to Phil Hammond, this technology will one day be used extensively in the farming industry throughout Africa and the world, especially in places like abandoned warehouses and commercial buildings. Chlorophyll stimulating red and blue light provides the living wall with radiant energy which is vitally required in the photosynthetic process. Daylight conditions are mimicked using a colour mix of one blue LED chip (460-470 nanometers) and three red LED chips (620-625 nanometers).

You might ask why only red and blue wavelengths of light but the scientific reasoning for this colour mix is that it produces a specific spectral output of light which is vitally important in the first stage of photosynthesis as Chlorophyll needs to absorb light, these specific wavelengths of radiant energy are the two ideal colours of light to stimulate plant growth. The blue wavelengths maximise the absorbability of Chlorophyll and Carotenoids for growth and the red wavelengths have a lower absorbability but have a notable affect to Chlorophyll and the light cycle effect or circadian rhythm of the plant. The LED grow lights also require to be wired into a circuit which has a timer, the timer is set so that the lights are switched on for sixteen hours of daylight and off at night for eight hours of night time or darkness. This is extremely important as plants also needs to sleep as this plays a vital role in the plants cycle of releasing carbon dioxide. Plants like all life forms need to maintain balanced Circadian Rhythms.

Phil Hammond states, “Not only are these LED grow lamps energy efficient, converting nearly all of their power consumption into usable light, but they are also able to produce a dual band colour spectrum to optimise photosynthesis without added heat, infrared or UV, with outstanding results as the plant develops a higher abundance of leaf nodes which means a larger crop harvest.”

In the lobby the interior decorator chose a beautiful pendant out of Eurolux’s Meteor Range of Pendants which meets the guest’s eyes upon arrival to the hotel. The pendant was ideal as it was fitted with long life 1 Watt Spica LED Lamps instead of the traditional halogen bi-pin lamp, which has a very poor lifespan, this vastly decreases the maintenance and replacement lamp costs for this type of lamp. In addition to this Eurolux also supplied their P372 pendant with the same 1 watt Spica LED lamp to complement the lounge areas in the lobby.

Daniel Hammond designed the hotel’s exterior lighting and says the owner gave him great creative freedom when designing the lighting. One request was however that the tented canopy outside the entrance needed to be washed in colour and specifically for the light to penetrate through the canvas and create a landmark as each occasion required. Eurolux supplied RGB colour changing LEDs to meet the goal. The colour changing lights are installed on the poles of the tent, cables are then run to a DMX lighting controller which is connected to a computer. On the computer software is installed which enables the user select various colour combinations, patterns and set moods for special occasions, for example, green and white on St. Patrick’s Day or red, green and white over the Christmas period. This adds to the atmosphere of the hotel, while providing ample functional light on arrival to Africa’s greenest hotel.

“With the hotel being located in the Airport Industrial Area, one of the owner’s biggest concerns was that we provided sufficient lighting for security purposes. We strived to provide the functionality required whilst at the same time selecting fittings that complemented the overall design of the hotel.” says Daniel Hammond.

The fitting Hammond selected for the exterior parking and street lighting was the perfect choice, given the green status of the hotel. The 32W LED pole light pictured below, which is exclusively available from Eurolux, not only produces great quality usable light but it also offers a unique selling point with its integrated optical motion sensor. The fitting operates in a unique manner because it has the functionality of dimming. The motion sensor is able to detect movement within a 10 meter radius, once movement is detected it immediately achieves 100 percent brightness or light output and after a five minute period of no movement it dims to 50 percent of its light output with the added benefit of a 50 percent saving in energy consumption.

One part of the brief that Blair Hammond & Associates needed to adhere to was the owner’s request to effectively illuminate the façades of Hotel Verde. This was achieved in a variety of forms, the first was by installing Eurolux’s 22W LED Wall Washer, manufactured by Jingri, on the north and south facing façades. These were installed at 17 meters high, which at night effectively sets the hotel apart from the rest of the buildings in the area by washing the façades with natural white light. In addition to this LED strip lighting was installed on the north facing façade in the corporate colours of Hotel Verde, green and purple, which helps guests arriving from the Cape Town International Airport identify their destination. The final piece to the façade jigsaw puzzle was illuminating the beautiful mosaic mural on the elevator shaft, this was done by utilising 3 of Eurolux’s FS122 80W LED flood lights which were each mounted on an outreach arm. Once the flood lights were installed correctly they were then precisely aimed to evenly wash the piece of art with light from top to bottom. Lastly Blair Hammond & Associates specified wall mounted lights from Eurolux. These were installed outside of all doorways leading outside from the hotel which provided ambient and security lighting.

David Pollock, Hotel Verde Project Manager commended the combined effort of Blair Hammond & Associates and Eurolux, “the beautiful lighting design and installation demonstrates how important it was for Hotel Verde to team up with specialist lighting companies, every box was ticked and the goals set out in the lighting design brief were successfully achieved. The end result is magnificent and is one that we at Hotel Verde are extremely proud of.”

Eurolux also supplied the lighting for the parking garage with its 2 x 28W T5 Fluorescent Vapourproof Fitting and the ramp down to the garage is illuminated with wall lights out of Eurolux’s SG range which have no glare for any oncoming drivers.

Hotel Verde showcases sustainability in action by investing in green technologies that will stand the test of time. “It is wonderful to be part of a project of this magnitude on South African shores, we can only hope that many other enterprises will follow suit,” concludes Bouchier.